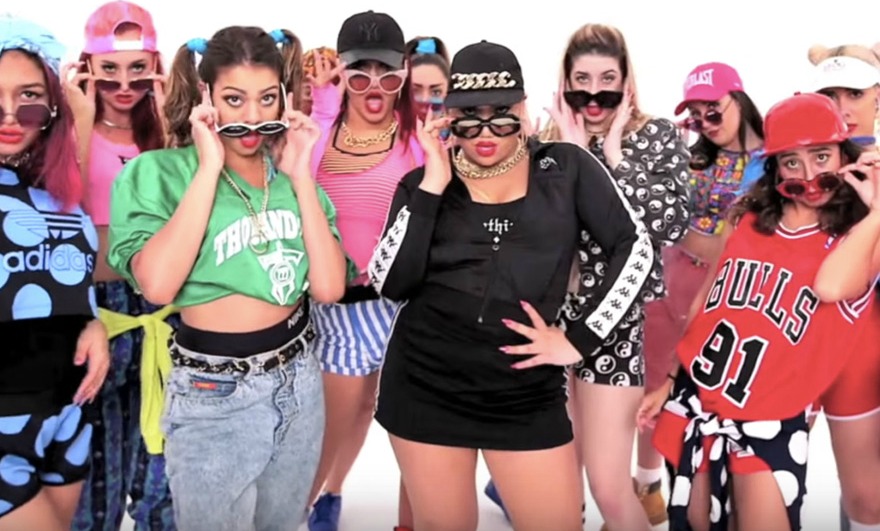 April has arrived, the clocks have gone forward and we are officially on British Summer Time. The sky is blue, the temperature has been… mild, we’ve already got shoe blisters and our handbags are full of plasters and compedes. Spring is here ladies!
Sunny warm weekends begin NOW and we can’t wait for roof terraces, BBQs and some Dance Hall music. Pass us some meat from the barbie, dunk a lime in our beer (or PIMMS), temperatures rising but we’re getting down, dutty wining and t-t-t-twerking. Sure, we’d rather be beach partying, but we’ll settle for a beer garden with wonky picnic benches.
Our Twerking Dance Party and Dance Hall Party are currently our biggest sellers. Our guess is the two biggest twerking hits of 2016, Rihanna ft Drake “Work” and Justin Bieber “Sorry” have had a massive influence on these becoming our top trending hen party dance experiences.

It’s worth mentioning our Twerking Dance Party and Dancehall Dance Party teachers performed with Rihanna and Drake when they sang Work at the 2016 Mastercard Brit Awards. We told you our choreographers have danced with the best. Who better to teach you a Work / Twerk class than Dancers who have supported these A list megastars on the biggest stages and award ceremonies on the planet. They have invaluable first-hand experience of Work twerking straight from Rihanna herself. 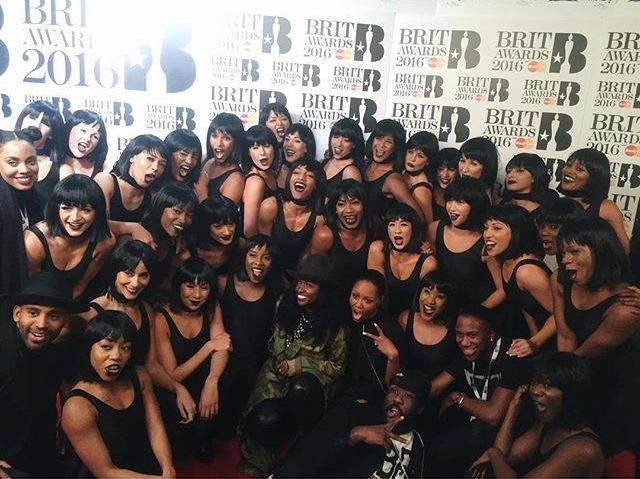 Twerking has been the dance floor favourite for some time now and it doesn’t appear to be dying out. It was thrusted into our faces at the VMAs when Miley Cyrus infamously twerked with a foam finger (who doesn’t love a statement accessory), but many twerking critics were quick to defend their national dance and insisted that Miley was twerking incorrectly! Which begs the question: What is twerking?
The Oxford English Dictionary, describes Twerking as a verb, (to twerk or not to twerk, twerk lols). “To dance to popular music in a sexually provocative manner, using thrusting movements of the bottom and hips while in a low, squatting stance.” – glad we’ve got that sorted. But c’mon you scholars, seriously…? Pop music? That’s a very generic term. Sure, our Justin Bieber Sorry Dance Party or our Rihanna Work Dance Party may fall under a pop umbrella. But they definitely have Dance Hall Party influences and flavours. So where exactly did this sexually provocative dance using thrusting movements of the bottom and hips all whilst squatting originate?
Twerking Dancing clearly looks like it has similarities with several traditional West African dance styles, particularly the mapouka. It’s worth noting the dance did not originally have sexual intent but rather became sexualised in the 1990s American hip-hop scene. Filthy lot!
The word itself? It appears to be a fusion of blending the word twist, twitch, jerk and work. I mean, that’s kinda createnius (note to self, blending words doesn’t always work).The earliest recorded account of using the verb Twerk was the New Orleans `bounce` music scene. In DJ Jubilee’s Jubilee All track, he sings “Shake baby, shake baby, shake, shake, shake… Twerk baby, twerk baby”. This was the first documented use of the word. Who knew DJs were such language innovators.
Rihanna, “Work, a DanceHall and Reggae Pop Song”, (see! What did we tell you about that Pop umbrella) channels that 90s old school dancehall rhythm. Hugh McIntyre of Forbes described the song as urban and mixes hip hop influences with “island vibes”. We hear ya Hughie, whenever we hear that slow rhythmic percolating beat and sinuous synth lines it’s like we can already smell the Caribbean air. Where’s our coconut-colada at? 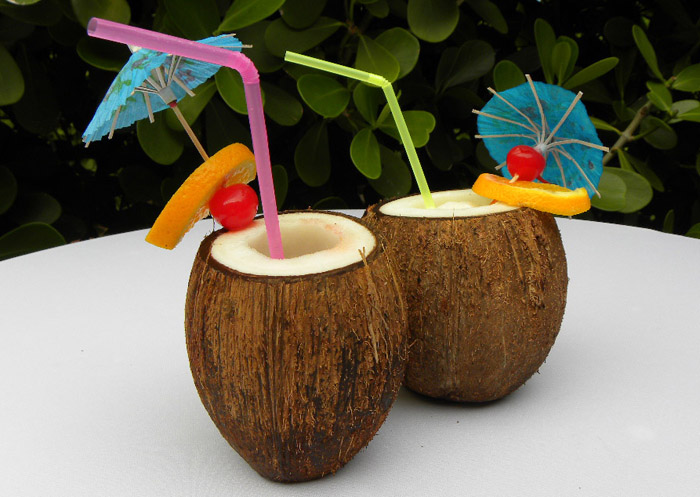 So ladies, if you like to ride dem 90s dancehall vibes and wanna twist, twitch jerk and work. Book your Rihanna Work Dance Party now.
It’s not just Rihanna’s team who was channelling those 90s vibes. Justin Bieber Sorry is also described as a dancehall tropical house track. Another round of coconut-coladas please! Sorry is a little less, ‘mature` shall we say and offers a spritz of sweet beachy flavour. But it isn’t just this 2016 Pop-Caribbean-vibe that got the World hooked. It’s the colourful twerking music video that mesmerised us all.
Choreographed by one of the biggest choreographers right now, Parris Goebel and her ReQuest and Royal Family dance crews have danced this video to receiving over 1.16 billion views on YouTube. Parris not only choreographed it, she styled it too! “[We wanted to] just bring more life to it. We were going for a vintage ’90s vibe. Me and two of my friends pretty much styled everyone. We all did our own makeup and were spontaneous”. 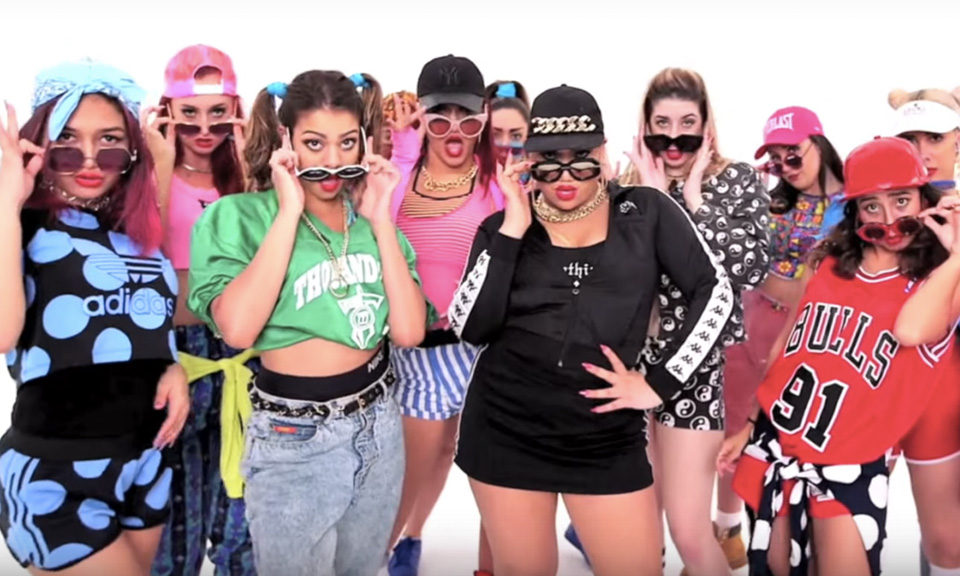 Cheers for the tip Parris! Especially if you’re booking either a Dancehall Hen Party or Twerking Hen Party, we want to see costumes! Fun, colourful, 90s looks. Bright boob tubes, active-wear chic, trackie-tops, lycra-bottoms! Take a leaf out of Parris’ hot pants, get the girls together, steal and borrow vintage/retro pieces and remember the 90s was when we could have colourful lips and eyes! We miss those days!
Our Twerking Dance Party and Dance Hall Party bring that tropical house party vibe to London. Or many other cities and towns in fact. You don’t need airfare, get in touch now because “we’re missing more than your body”.